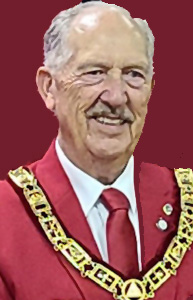 Ron was born on August 14, 1946 in Price, Utah to Arthur and Margaret Penfold and is the eldest of four children. He lived in Colorado and Arizona and graduated from Tombstone Union High School, Tombstone Arizona in 1965. That same year in November he enlisted in the United States Air Force. His first tour of duty after basic training was Chanute A.F.B., Rantoul, Illinois where his specialty was Jet Engine Mechanics. He was selected to be an instructor for this school. He later cross trained into Maintenance Data Systems Analysis and was an instructor in that course for several years.
Tours of duty took him and sometimes his family to Texas, Alabama, South East Asia, Washington D. C., Michigan, Hawaii and lastly to Minot where he retired after 20 years of honorable military service. In 1986 he was hired by the Postal Service as a Letter Carrier and he retired in December 2008.
Ron was raised to the sublime degree of a Master Mason 50 years ago, June 6, 1971 at Sangamon Lodge No. 801, Fisher Ill. He is a Member of Star in the West Lodge No. 33 and a Life member of Mahomet Masonic Lodge No. 220, Mahomet Ill. He was Worshipful Master in 1995 and Secretary from 1996 to 2002. He served two years as District Deputy Grand Master, six years as Grand Lecturer and several terms on the Policy and General Purposes Committee of the Grand Lodge of North Dakota.
Ron is a Past Grand Master of the Grand Lodge of North Dakota and an Honorary Grand Master of the Grand Lodge of Illinois. He is the current Secretary of the Minot Shrine Club and Scottish Rite Bodies. Ron is a 33 Inspector General Honorary of the Ancient and Accepted Scottish Rite of Freemasonry.
He is a member of the Mandan York Rite and Northwest York Rite bodies. He currently holds a Grand Officer position in the Grand Chapter. He is a past Grand Master of Cryptic Rite masons, a Past Grand Commander of Knights Templar and is a Past Puissant Sovereign Commander of St. Felix Conclave, Red Cross of Constantine. Ron is a Past Excellent Chief of Knight Masons and a KYCH recipient. In 2013 he was awarded the Knights Templar Cross of Honor for exceptional and meritorious service.
In 2007 as State Dad for Rainbow Girls he was awarded the Rainbow Cross of Color. He is a member of the National Sojourners and Quatuor Coronati Research Lodge No. 2076, London England. In 2016 he was President of the Midwest Conference on Masonic Education held in Grand Forks.
He is a member of KEM Shriners, Minot Shrine Club, Minot Merrymen and Hillbilly’s. In 2014 he was awarded the KEM SAMSAR Jewel and is the current Chief Rabban of KEM Shriners. Ron has served the craft for 50 years.